« The recent events in Ukraine make us wonder about Russia's place in globalization." Globalization refers to the acceleration of movements and exchanges (of human beings, goods and services, capital, technologies or cultural practices) across the planet.

Russia is trying to integrate its unevenly developed and integrated territory into world trade, thanks to a strategy of power and even threat, but has lost its former greatness, a difficult desire because of its geography and its opposition to Europe. On the one hand, Russia is an unevenly developed territory integrated into world trade. Firstly, its integration into the globalization process is difficult to control because of its geography.

While the country is large, it is relatively sparsely populated, with a population of 144 million.

The distribution of wealth and population is very uneven, it takes place mainly in the west of Russia, on the European side: the European part and the Urals are industrialized in contrast to the west of the country.

There is little transportation through Russia, which reduces the power of man.

Even in the twenty-first century, to cross it by train takes six days.

In addition, Russia's climatic conditions make it difficult to integrate.

The agricultural growing season is short, due to the continental climate which causes great variations in temperature. Secondly, its territories are connected to global trade at the regional and local levels.

Only 15 cities have a population of more than one million and only 5 are in the Asian part of the country, which represents XXXX. The city of Moscow alone accounts for 20% of the gross national product; it is five times the GNP of the Khanty-Mansi region - where raw material extraction industries are concentrated - and St.

Petersburg, the second and third largest region in terms of GNP.

The integration of the territories on the Russian scale is therefore very uneven. Thirdly, Russia's openness to trade is still limited to specific sectors, even if it’s now seeking new outlets.

Russia's ability to integrate into globalization comes from its ability to exploit the riches of its subsoil, which are by far its main source of abundance.

Russia is second only to the United States at the world's biggest supplier of natural gas, and of course she uses this power to its advantage.

The country has an incredible wealth of natural resources: gas, oil, iron, coal, wood, phosphate, but their extraction, transportation and trade is complicated by the size of the country and the climatic conditions.

The Russians use their energy to make agreements: the better your relations with Russia, the less you pay for energy.

Even if in Europe, many countries are trying to move away from their energy dependence on Russia, 25% of Europe's gas and oil comes from Russia.

Latvia, Slovakia, Finland and Estonia are 100% reliant on Russian gas; half of Germany's gas supply comes from Russia.

But the Russian economy is also trying to diversify with agriculture for example.

Since 2017, Russia is also the first world exporter of wheat. On the other hand, Russia is today in a power strategy that articulates economic cooperation but also threats on its neighbors. Firstly at the diplomatic and military level, Russia is developing a strategy of power and influence, on its borders, but also further away in the Mediterranean.

There was a time when Russia, through the USSR, ruled a part of the world: the time of the Cold War, when two superpowers, the American and the Soviet, competed for influence. 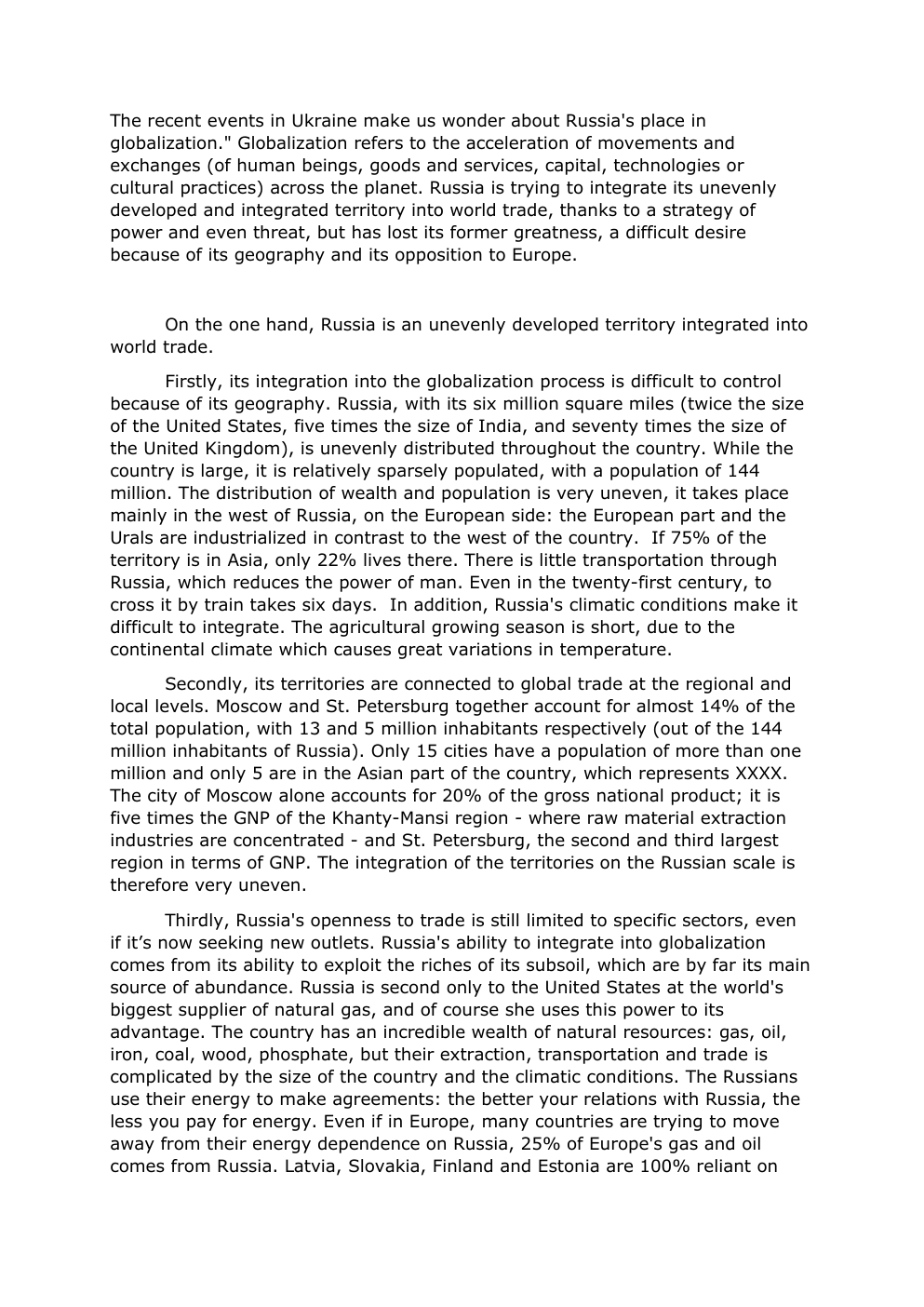