Hanif Kureishi - The Buddha of Suburbia

« Historical Context of The Buddha of Suburbia The 1970s were a decade of change worldwide.

Many former colonies of Britain had obtained independence in the 20 years previous, and the 1960s brought social change in the form of drugs,legalization of abortion in the UK trr1967, and the ideas of free [ove, peace, and sexual permissiveness as espoused by the hippies.

These ideas of the 1960s permeate the beginning of the novel but soon give way to the economic recessions and social discontent that England experienced later in the decade.

Amidst this backdrop and despite economic depression, the British middle class thrived during the 1970s. Though Karim is mostly involved with more liberal politics, the seventies also saw the rise of neo-Nazi political parties such as the National Front.

The National Front expressed strong anti-immigrant sentiment and supported sending immigrants back to their countries of origin.

After the so-called Winter of Discontent in L978-79, England elected Margaret Thatcher as Prime Minister.

She represented a major swing towards conservatism in British politics.

Buddha often mentions the animosity between Pakistan and India, which is a result of the partition of British India inL947.

This created a massive refugee crisis as individuals from different religions crossed the India-Pakistan border, and it resulted illistorical Context of The Buddha of Suburbia Other Books Related to The Buddha of Suburbia *"r, of the books and plays that Karim encounters throughout the novel reiate thematicaily to the novel itself: Jack Kerôuac's On The Road follows a similar vein of a physical journey and features heavy drug use; Jamila reads Simone Beauvoir's book The Second Sex, which is widely considered to be the starting point of §econd wave feminism; and Rudyard Kipling's The Jungle Book is innately imperialist, racist, and reflective of England's questionable views on India and Indian people.

Many of Hanif Kureishi's other novels explore similar themes of immigration, youth culture, and coming of age, most notably his second novel, The Black Album.

Buddha also shares broad similarities with novels such as Zadie Smith's [ÿthite Teeth and Chimamanda Ngozi Adichie's novel Americanah, as they portray the immigrant experience of coming from previously colonized countries to England, just as Haroon does.. » 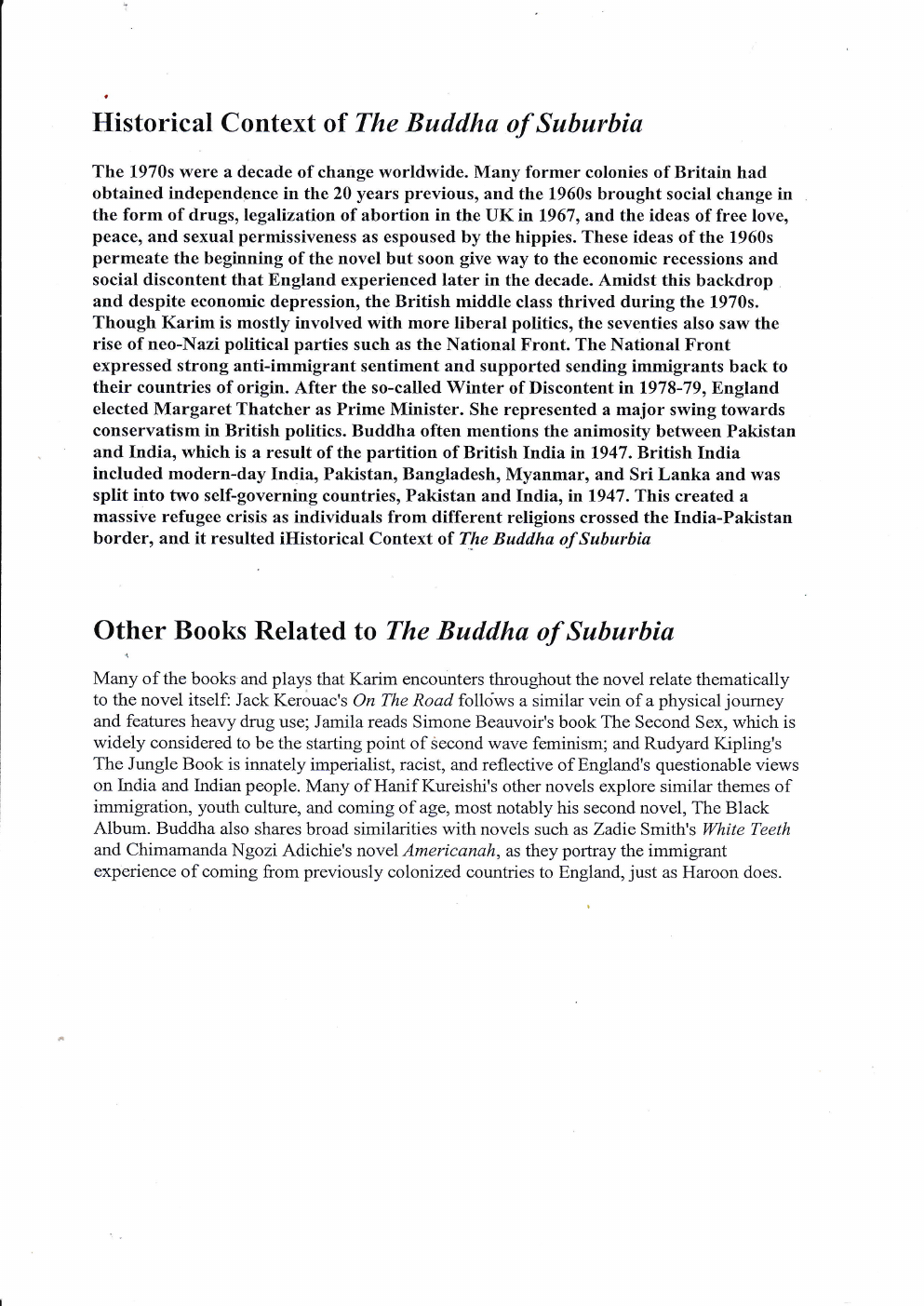