- Mahatma Gandhi Art is a universal means of battling and report atrocities and injustices committed in the world.

In all its forms, art enable to communicate and express these emotions to make it a weapon of protest that can become the beginning of realization. To understand that we will study an extract from "V for Vendetta" by Alan Moore (1982), the song from “Sleep now in the fire” by Rage against the Machine, an excerpt from the essay “The feminine mystique” by Betty friedan, The works of Banksy “Dismaland”, excerpt from the play “Much ado about nothing" by william shakespeare’s and a newspaper article “playboy club reopening to attackt protests against” on Hugh Hefner published by The Guardian. We can then ask ourselves “How can the art of debate become a contestation?” To answer this, first of all, we can see that an exchange enriches its point of view. view and allows you to discover different ideas.

In a second phase, we will see why conviction and argumentation are means used to convince through mastery of the language.

And in the end, we will see that the debate sometimes leads to an awareness and the beginning of action. You should know that a debate is an exchange that can be used to enrich one's point of view by discovering different ideas.

It helps to challenge stereotypes and ready-made ideas.

We can see that in "V for Vendetta" during his speech on television "And where once you had the freedom to object, to think and speak as you saw fit, you now have censors and systems of surveillance coercing your conformity and soliciting your submission”.

V uses empathy to attract attention of the public and during his speech he demands freedom for the citizens and encourage them to rebel against the government.

V's word is striking because it affects everybody (children, women, men, old people) on a situation which must be changed as with the song “sleep now in the fire” sung by Rage Against the Machine in front of the Federal Hall in face of the New York Stock Exchange which is the world's largest stock exchange. He says "The world is my expense, the cost of my desire, jesus blessed me with its future and i protect it with fire.

So raise your fists and march around just don't take what you need." This aims to encourage the population to demonstrate against the government.

This song is striking because as for "V for Vendetta", he speaks straight to the population without filter to speak about topics that concern them. The audience is therefore receptive and becomes an ally.

For example in “Much ado about nothing” with Beatrice and Benedict's discussion when Benedict becomes "armed wing" of Beatrice. "Benedick: Tarry good Beatrice, by this hand I love thee. Beatrice: use it for my love some other way than wearing by it. Benedict: Think you in your soul the count Claudio hath wrong'd Hero? Beatrice: ye, as sure as I have a thought or a soul. Benedick: Enough, i am engaged i will challenge him." Beatrice uses Benedick's feelings to manipulate him and makes him an ally with the use of speech.

by this announcement, “More than 200 people have said they will attend the event on its Facebook page, and are planning to greet VIPs with chanting and placards." which shows that through social medias information circulates quickly and can bring together several allies to fight together against a common cause. Fighting an ideology is above all a personal fight like in "Sleep now in the fire" where the singer uses the first person a lot.

“I” to speak to his public “And I protect it with fire I am the Nina The Pinta The Santa Maria The noose and the rapist The fields overseer the agents of orange The priests of Hiroshima The cost of my desire Sleep now in the fire » The author uses the song to talk about topics that matter to him such as colonization, war or slavery in the United States. He is also against the launching of the atomic bomb on Hiroshima and the use of agent orange denounced in this song. This conviction is also seen in "The feminine mystique" which denounces the conditions of women of the time.

“For over fifteen years there was no word of this yearning in the million of words written about women, for women, in all the columns, books and articles by experts telling women their role was to seek fulfillment as wives and mothers”.

In this excerpt we can see the personal fight of the women, because in fact, no one really listens to them and in a patriacal society it is difficult to be other than stereotypes.

This book finally talks about "The problem that has no name" and has been a relief for millions of women who no longer feel alone with this problem. The speaking is often heard when the arguments are founded in favor of justice.

For example in "Much ado about nothing" Beatrice is on the side of her cousin Hero "sweet Hero, she is wrong'd, she is slander'd, she is undone" thinking that Claudio has flouted the honor of his cousin, she therefore seeks revenge on him because, according to Beatrice. » 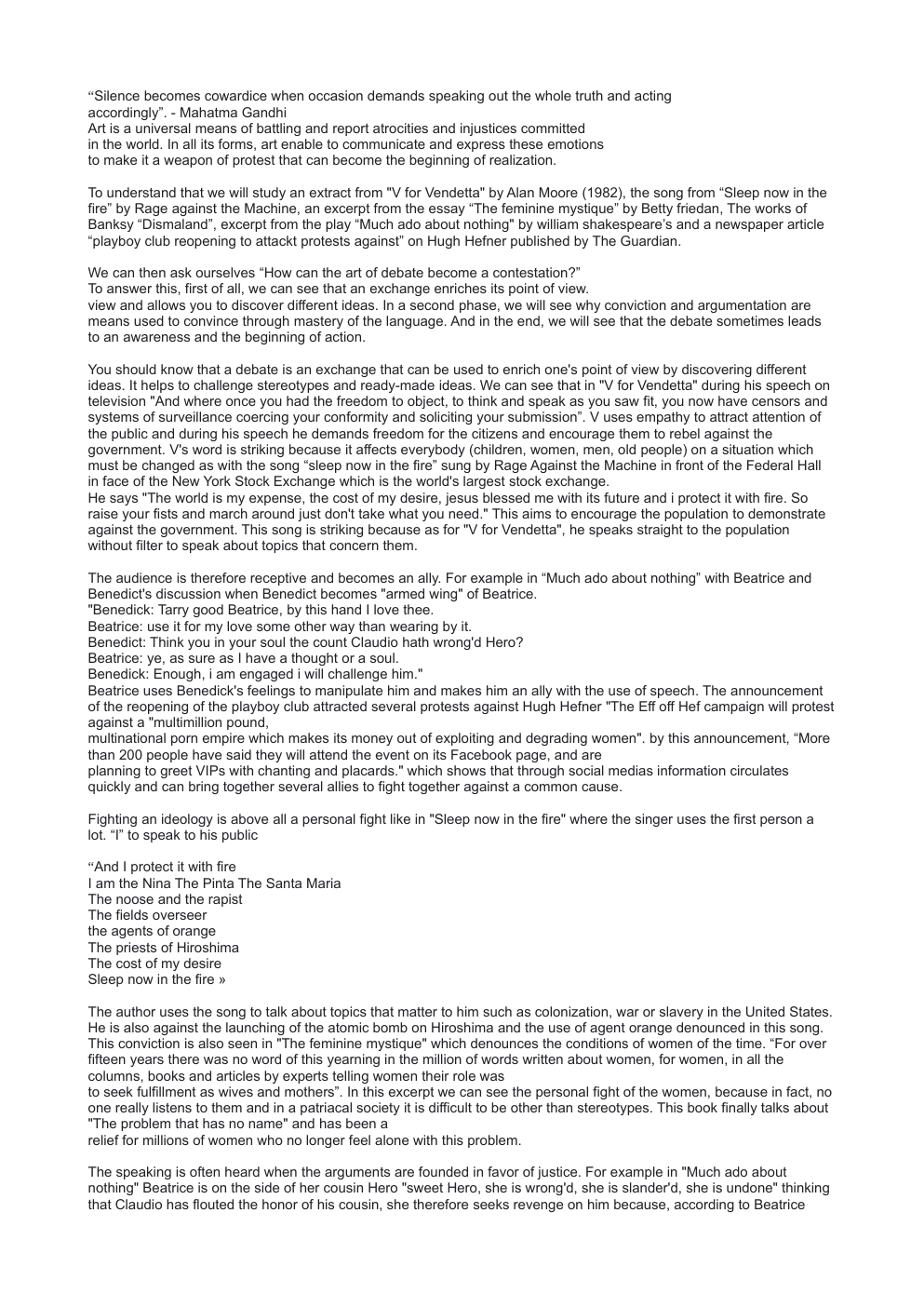