Black Hole, an extremely dense celestial body that has been theorized to exist in the universe. The gravitational field of a black hole is so strong that, if the body is large
enough, nothing, including electromagnetic radiation, can escape from its vicinity. The body is surrounded by a spherical boundary, called a horizon, through which light
can enter but not escape; it therefore appears totally black.

The black-hole concept was developed by the German astronomer Karl Schwarzschild in 1916 on the basis of physicist Albert Einstein's general theory of relativity. The
radius of the horizon of a Schwarzschild black hole depends only on the mass of the body, being 2.95 km (1.83 mi) times the mass of the body in solar units (the mass
of the body divided by the mass of the Sun). If a body is electrically charged or rotating, Schwarzschild's results are modified. An "ergosphere" forms outside the
horizon, within which matter is forced to rotate with the black hole; in principle, energy can be emitted from the ergosphere.
According to general relativity, gravitation severely modifies space and time near a black hole. As the horizon is approached from outside, time slows down relative to
that of distant observers, stopping completely on the horizon. Once a body has contracted within its Schwarzschild radius, it would theoretically collapse to a
singularity--that is, a dimensionless object of infinite density.

Black holes are thought to form during the course of stellar evolution. As nuclear fuels are exhausted in the core of a star, the pressure associated with their energy
production is no longer available to resist contraction of the core to ever-higher densities. Two new types of pressure, electron and neutron pressure, arise at densities a
million and a million billion times that of water, respectively, and a compact white dwarf or a neutron star may form. If the star is more than about five times as massive
as the Sun, however, neither electron nor neutron pressure is sufficient to prevent collapse to a black hole.
In 1994 astronomers used the Hubble Space Telescope (HST) to uncover the first convincing evidence that a black hole exists. They detected an accretion disk (disk of
hot, gaseous material) circling the center of the galaxy M87 with an acceleration that indicated the presence of an object 2.5 to 3.5 billion times the mass of the Sun. By
2000, astronomers had detected supermassive black holes in the centers of dozens of galaxies and had found that the masses of the black holes were correlated with
the masses of the parent galaxies. More massive galaxies tend to have more massive black holes at their centers. Learning more about galactic black holes will help
astronomers learn about the evolution of galaxies and the relationship between galaxies, black holes, and quasars.
The English physicist Stephen Hawking has suggested that many black holes may have formed in the early universe. If this were so, many of these black holes could be
too far from other matter to form detectable accretion disks, and they could even compose a significant fraction of the total mass of the universe. For black holes of
sufficiently small mass it is possible for only one member of an electron-positron pair near the horizon to fall into the black hole, the other escaping (see X Ray: Pair
Production). The resulting radiation carries off energy, in a sense evaporating the black hole. Any primordial black holes weighing less than a few thousand million metric
tons would have already evaporated, but heavier ones may remain.
The American astronomer Kip Thorne of California Institute of Technology in Pasadena, California, has evaluated the chance that black holes can collapse to form
'wormholes,' connections between otherwise distant parts of the universe. He concludes that an unknown form of 'exotic matter' would be necessary for such
wormholes to survive. 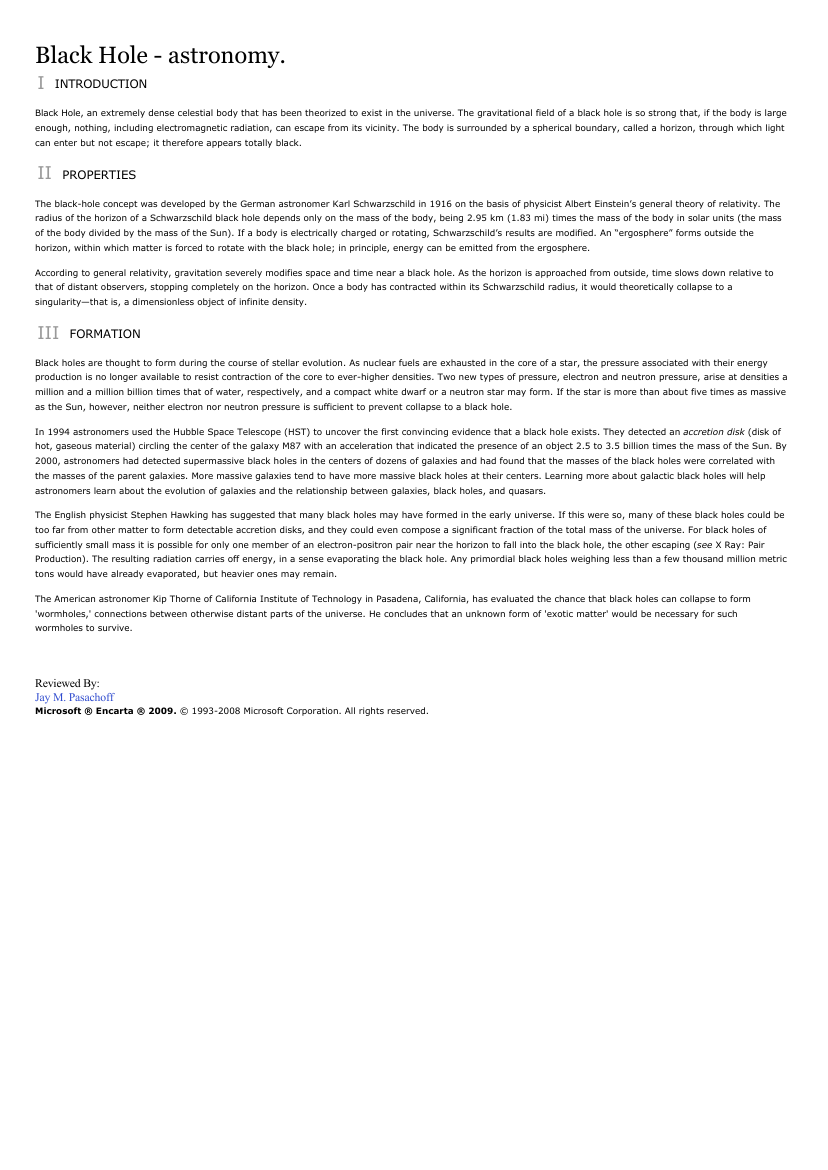